Unto us a child is born 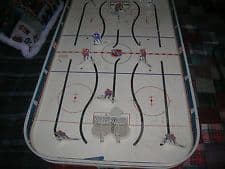 “The people walking in darkness have seen a great light; on those living in the land of the shadow of death, a light has dawned.”- Isaiah 9:2-3

“Hope is being able to see that there is light despite all the darkness.”- Desmond Tutu

For my sixteenth Christmas, my parents gave me the opportunity to select my major gift.  As a loyal Chicago Blackhawks fan, I chose a table-top (Rod) hockey game similar to the one pictured.  My joy was not diminished by the fact that the opposing teams were the Montreal Canadiens and the Toronto Maple Leafs.  Nor did it matter that I would not be surprised on Christmas Day.  The foundation of my joy was my parents’ love and their commitment to me as well as my inclusion in the process.

When Jesus was born, King Herod was the epitome of earthly greatness.  At the age of thirty-three, Herod was given the title “King of the Jews”- bestowed only because he was a friend of the Romans.  In his day, King Herod was not perceived as the villain in the Christmas Story.  Yet darkness permeated King Herod’s soul.  And it was not Herod, but the Magi who sought truth with respect and humility.  Author and pastor John Ortberg observes that even at Jesus’ birth, He had a way of forcing people to declare where they stand.  Despite the darkness hovering over Bethlehem, the Magi followed the star to the light of Jesus.

The story of Jesus’ birth is an old story that never gets old.  Into the darkness of our ministry downsizing or vocation loss, the light of Jesus shines.  Like the Magi, we need to declare where we stand.  John Ortberg (Who is This Man?) offers these words of encouragement and hope:

“The child in Bethlehem would grow up to be a friend of sinners, not a friend of Rome.  He would spend his life with the ordinary and the unimpressive. . . . He would announce the availability of a kingdom . . . where blessing- of full value and worth with God- was now conferred on the poor in spirit and the meek and the persecuted.”

“Arise, shine, for your light has come, and the glory of the Lord rises upon you.”- Isaiah 60:1