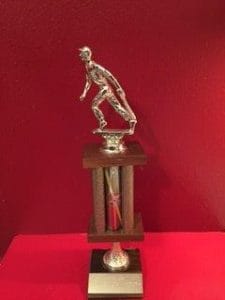 “Awake, O sleeper, and arise from the dead, and Christ will shine on you.”- Ephesians 5:14

“There is no short cut to achievement.  Life requires thorough preparation- veneer isn’t worth anything.”- George Washington Carver

During my undergraduate years at Concordia- River Forest, I spent my summers practicing with the Ashburn Lutheran Church softball team.  Actual game appearances were a rarity.  In August of 1971, however, one playoff game changed everything.  When some of the regulars didn’t show, I was pressed into duty as the starting catcher.  After failing to reach base in my first at-bat, I lined a sharp single over the shortstop’s head in my second plate appearance.  Later in the game, I took a relay from the pitcher and tagged out a runner attempting to score from second base on a single to right field.  Although we lost 7-2, my years of preparation came to fruition in one shining moment.

Benched by our ministry downsizing or vocation loss, we have gone from participant to spectator before we truly realized what hit us.  Time is slipping away.  The crisis seems to have paralyzed us and the sadness is overwhelming.  Fear intimidates us.  We abdicate our accountability.  Max Lucado (You’ll Get Through This) redirects us, stressing that God’s sovereignty empowers our responsibility:

“To do nothing is the wrong thing.  To do something is the right thing.  And to believe is the highest thing.”

Desperate to get back in the game, it is essential that we come to realize we can’t go it alone.  Our soul is not meant to be self-sufficient.  We are intentional in our preparation because we understand we’re part of something much bigger than ourselves- God’s perfect plan.  As we pray “awaken my soul”, God’s light begins to shine through us.  Mark, writing his story in Timothy Keller’s book Walking with God Through Pain and Suffering, offers a refreshing perspective:

“I played sports in my younger years, and I always hated sitting on the bench.  One day, just after my diagnosis (of ALS), I cried out to God that I thought I was being pulled out of the game while I still had something to offer.  His response was, ‘You have been on the sidelines for some time; you are just now getting into the game.’ ”