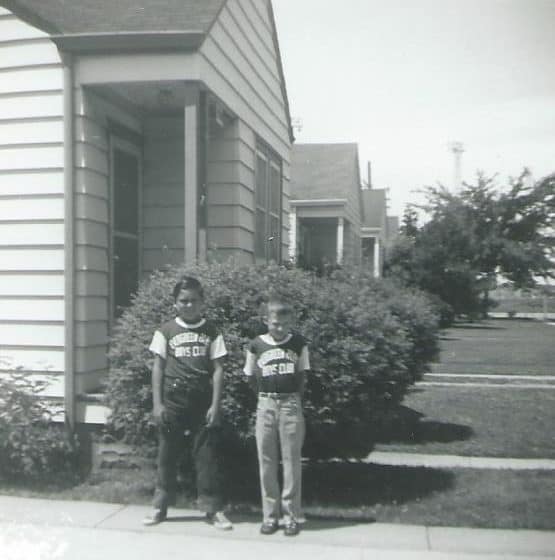 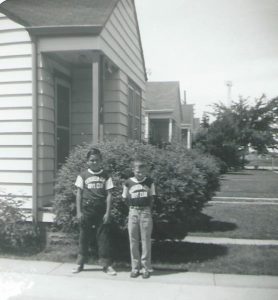 “With the tongue we praise our Lord and Father, and with it we curse men, who have been made in God’s likeness.  Out of the same mouth come praise and cursing.  My brothers, this should not be.”- James 3:10-11

“Blessing-giving should be asymmetrical.  It’s not a form of barter.  It’s grace.”- John Ortberg, Soul Keeping

On a cool spring evening in 1959, seven and eight-year-old boys interested in playing Pee Wee League baseball for the Evergreen Park Boys Club assembled for the league “draft” at a local baseball field.  The Boys Club had a progressive, blessing-giving approach to organized play: all players present for a game were required to participate for a minimum of three innings.  My best friend Cliff (on my left, in front of his house) and I were chosen for the same team, the Phillies- sponsored by Murphy Rents Most Anything!  Standing next to Cliff on the outfield grass, I clearly recall his three words of encouragement: “Don’t strike out!”

“Don’t strike out!”  Easy in theory.  Difficult to practice.  How we react in the aftermath of our ministry downsizing or vocation loss determines the health of our soul.  Dallas Willard points out that there are two great words the Bible uses to describe the posture of our souls toward other people- to bless and to curse.  Dallas states that we will do one or the other- there is no middle ground:

A narrow interpretation of cursing someone is that means to swear at them or put a hex on them.  But “to curse” is much more subtle.  We can curse someone with a raised eyebrow or a shrug of the shoulder.  And the closer we are to someone, the more insidiously we can curse them.

We are extremely sensitive because our souls were made to be blessed and cannot survive without a blessing.  John Ortberg observes that “blessing is the projection of good into the life of another.  We must think it, and feel it, and will it. . . . Blessing is done by the soul.”

“Everyone needs a little rest.

Everyone needs a little joy.

And a song to sing in the darkest night.”