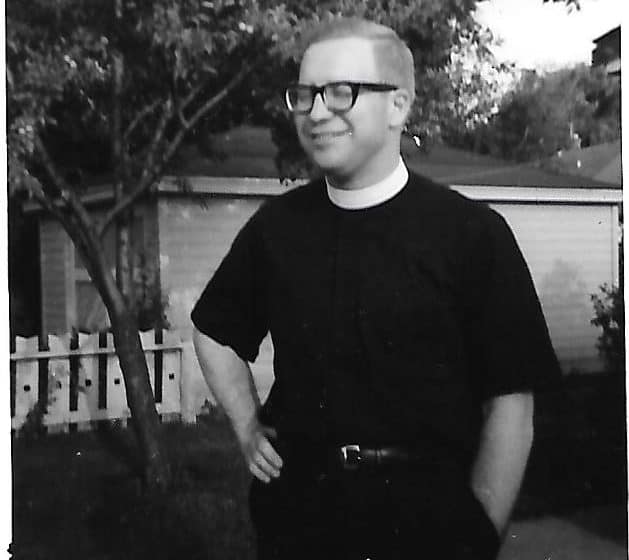 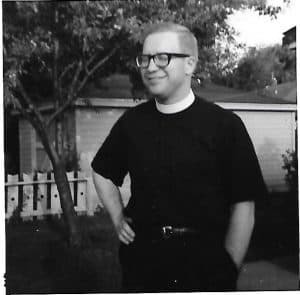 “Do not neglect to show hospitality to strangers, for thereby some have entertained angels unawares.”- Hebrews 13:2 (ESV)

“The wings of angels are often found on the backs of the least likely people.”- Eric Honeycutt

While I was an elementary school student in grades four through eight, I was blessed with two church families.  Ashburn Lutheran Church in Chicago was my home congregation where our family regularly attended worship.  Timothy Lutheran Church provided my Christian day school education, in which my parents took a very active role.  During my eighth grade year, Pastor Otto Thieme was assisted in ministry by Vicar Rodney Bathke.  As the 1964-1965 school year and Vicar Bathke’s stay at Timothy drew to a close, my mother Elinor extended her hospitality to Vicar Bathke with an invitation to Sunday dinner.  I took this farewell photograph of Vicar Bathke in our backyard.

Encamped by the great trees of Mamre, Abraham was a stranger in a foreign land.  Despite his isolation, Abraham trustingly walked through the open door the Lord provided:

“By faith Abraham obeyed when he was called to go out to a place that he was to receive as an inheritance.  And he went out, not knowing where he was going.  By faith, he went to a land of promise, as in a foreign land.”- Hebrews 11:8-9

Our ministry downsizing or vocation loss isolates us from former colleagues and our church family.  We compound the effects of that isolation by self-imposing restrictions on our contact with people of places associated with our loss.  The chains of exile bind us.  We feel powerless to act.  Yet, when we least expect it, Jesus and His angels minister to us in our aloneness, inviting us to participate in a fresh perspective.

“A man ought therefor to be hospitable, kind, upright, not desirous of what belongs to another. . . . Such is the favor in which hospitality stands with God. . . . You see that Abraham, in looking for guests, received God Himself to entertain.”

Frederick Buechner believes God’s coming always is unforeseen because “if he gave us anything much in the way of advance notice, more often than not we would have made ourselves scarce long before he got there.”  Are we equipped to receive the Lord’s blessing and direction while entertaining angels unawares?