Back in the box 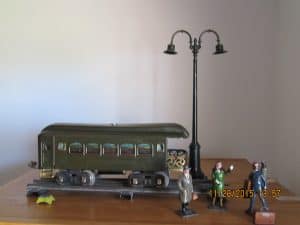 “Now there is great gain in godliness with contentment, for we brought nothing into the world and we cannot take anything out of the world.”- 1 Timothy 6:6-7

“Contentment does not come when we acquire enough.  It is a product of the way we think.”- John Ortberg

On the occasional fall/winter Sunday afternoon the Henning family was home, one of my dad William’s favorite father-son activities was setting up and running his 1927 Lionel standard gauge train set.  This was a labor-intensive operation.  Three large boxes were lugged down from our unheated attic.  Then all cars, tracks, and accoutrements were freed from their newspaper cocoons.  After the newspaper skins were returned to their boxes, assembly began.

Dad had a model track layout that took up the entire living room and extended into the dining area.  Dad and I would alternate running the passenger and freight cars.  Before dinner could be served, the entire assembly was taken apart, rewrapped, and placed back in the box.

Years later, when dad had downsized from independent to assisted living at Harwood Place, he took five possessions with him: sofa, recliner, TV/entertainment center, kitchen table and chairs, and his beloved Lionel.  Dad’s love of trains replenished him after his routine work week as a chemist testing corrosion inhibitors and continued as a source of contentment as his world grew smaller.  But his eternal joy was nurtured through weekly Bible study and corporate worship.

Russian novelist Fyodor Dostoyevsky (1821-1881) captured the essence of humanity’s lack of joy: “Men have succeeded in accumulating a greater mass of objects, but joy in the world has grown less.”  Similarly, John Ortberg observes that wise people build their lives around the eternal and squeeze in the temporary- not the other way around.  In other words, we need to decide what will last forever and what goes back in the box.

The material, emotional, and spiritual devastation of our ministry downsizing or vocation loss leaves a huge vacuum.  Kyle Idleman (The End of Me) reminds us God- Father, Son, and Holy Spirit- stands ready to fill that void:

“There is a deep void that used to be filled with whatever we lost.  That could be stuff or even relationships- none of which are bad in themselves.  But when it’s gone it leaves an aching cavity, and God is there to fill it up with himself.”