Enemies of the Heart 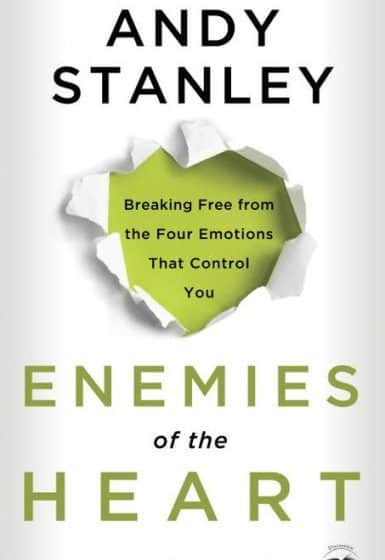 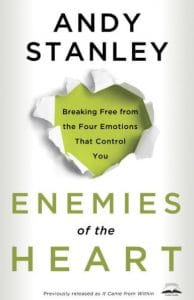 Andy Stanley, pastor and founder at North Point Ministries (Atlanta, GA), published Enemies of the Heart: Breaking Free from the Four Emotions That Control You in 2011.  Pastor Stanley first published the book in 2006 under the title It Came From Within.  Early on, the author observes, that the outside influences of the world possess the power to disrupt the rhythm of your heart.  And, left alone, these disrupters eventually become part of your personality.  Hence, pretending to be good creates problems because that allows you to ignore the true condition of your heart.  Therefore, Andy challenges his readers to embrace four new habits of the heart.  For as you exercise you heart, you allow it to maintain its God-designed rhythm.

Yet, Pastor Stanley notes, we reach for remedies instead of dealing with the root problem.  So, the symptoms never really go away.  Also, we’ve grown very skilled at covering for our hearts.  Thus, we tend to monitor behavior and pretty much ignore our hearts.  Sooner or later, though, what’s in our hearts – good or bad – translates into words and deeds.  Since we can’t control our hearts, it’s imperative that we employ a spiritual monitor so our hearts can change from the inside out.  And all of us reach adulthood with a least a few dings to the heart.  In turn, our response to four life-blocking enemies of the heart – guilt, anger, grace, and jealousy – determines the condition of our heart.

Furthermore, a single dynamic fuels each enemy: the debt-to-debtor dynamic.  To render the four enemies powerless, you must understand this dynamic, which causes an imbalance in any relationship.  As a society, Andy contends, we think we’ve learned to  live with debt.  But, only two ways exist to resolve the tension – pay up or forgive the debt.  Because each of the four viruses refuses to remain isolated or appropriately focused.  For example, guilt restates every wrong as an act of theft.  As a result, for the guilty heart to experience relief. the debt must be paid or cancelled.  Confession, then, represents the remedy for guilt.  Through confession, guilt loses its foothold in your heart, breaking the power of sin.

Anger, in contrast, occurs when you don’t get what you want.  The root of anger centers on the perception that someone’s taken something from you.  In addition, as anger integrates itself into your soul, you get comfortable with it.  Forgiveness provides the remedy.  However, greed, fueled by fear, disguises itself behind several virtues.  And since greedy people have a super-sized sense of ownership, only one habit offers a simple remedy to greed: generosity.  Finally, Pastor Stanley stresses, jealousy consists of an issue between you and God, although it rears its ugly head in interactions with others.  And when jealousy feeds your resentment, you look for ways to justify it.  So to quench jealousy, celebrate the success of others.  God’s the source of all good things, not all wished-for things.

“A healthy heart puts us in a stronger position to ward off temptation of all kinds.  Confession, forgiving, celebrating, and giving are habits that strengthen our resolve and remove the enemy’s base of operation in our lives.”