Hurting another person vs. betrayer’s desire 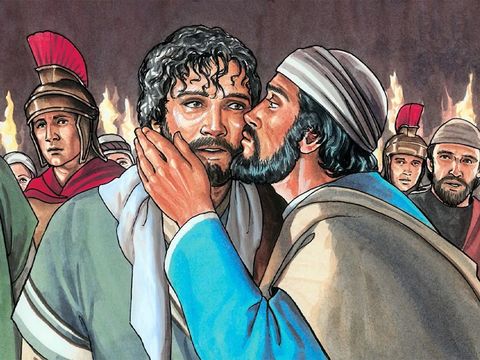 “In a situation that presents a trade-off between something a betrayer wants and hurting another person, the betrayer is willing to trade in that relationship to get what they want.  They choose gratification over love.  But truthfully, it’s not really a choice for them. . . .  All they see is what they want.”- Phil Waldrep

“But even as Jesus said this, a crowd approached, led by Judas, one of the twelve disciples.  Judas walked over to Jesus to greet him with a kiss.  But Jesus said, ‘Judas, would you betray the Son of Man with a kiss?’ “- Luke 22:47-48 (NLT)

In Chapter 3 (“Judas”) of Beyond Betrayal, Phil Waldrep examines Judas’ betrayal of Jesus.  First, Phil notes, we find it hard to understand why betrayal happens.  For example, Judas spent over three years in the presence of Jesus’ perfect love.  Yet, in the Garden of Gethsemane, Judas led a band of soldiers to find Jesus.

Consequently, when Judas betrayed Jesus, he also betrayed his fellow disciples.  And all others who followed Jesus.  So, Phil wonders, why did Judas choose to betray Jesus?

Historical accounts, Phil states, suggest Judas was a devoted Jewish nationalist.  Therefore, he most likely followed Jesus in the expectation He’d instigate a rebellion to overthrow the Romans.  Furthermore, some scholars suggest Judas believed that God sanctioned his actions.  Thus, in his misguided scenario, Judas’ betrayal would help make this a reality.  However, as Phil astutely observes, “The lies betrayers tell to justify their actions are usually a twisted version of the truth.”

However, rather than revolt, the Jewish people turned on Judas.  In addition, when Judas tried to recant, the religious leaders mocked him (Matthew 27:4).  As a result, Judas, who betrayed Jesus, experienced his own betrayal at the hands of the priests and elders.

In conclusion, Phil offers these closing comments on betrayers:

“Betrayers use the other person’s goodness against them.  It’s the very fabric of the betrayer’s deceit. . . .  Violating trust is just a means to an end.  That doesn’t mean they hate that person, it just means they don’t value them as much as what they want for themselves.”

Today’s question: What Scripture comfort you when your betrayer’s desire trumps hurting you?  Please share.

Tomorrow’s blog: “Voice of reason and right – drowned out”