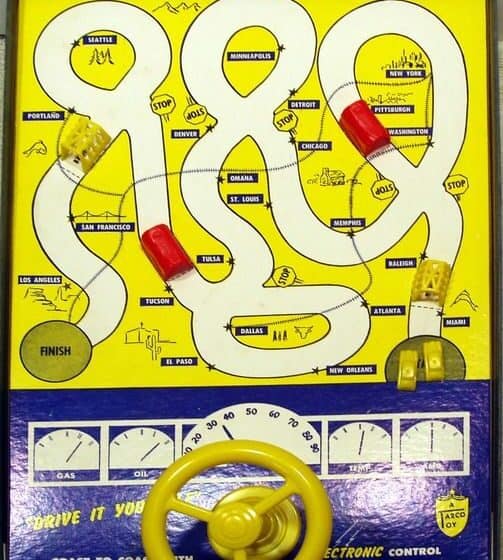 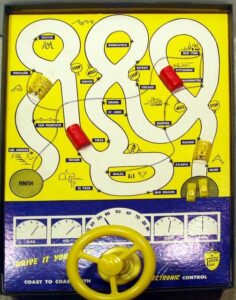 Skill-Drive game from the 1950s, made by Tarco Toys.

“Desirable difficulty.  Sounds like an oxymoron, doesn’t it?  What’s desirable about difficulty?  At first glance, nothing!  Upon further review, everything.”- Mark Batterson

“In fact, [the other ants] left in such a hurry that none of them noticed the two ants who stayed behind.  ‘Why go back?’ one asked the other.  ‘The place may not feel like home, but look at all those crystals.’ “- Chris Van Allsburg, Two Bad Ants

“All the paths of the LORD are steadfast love and faithfulness, for those who keep his covenant and his testimonies.”- Psalm 25:10 (ESV)

As a child, I kept my small treasure trove of games on the floor of my bedroom closet.  Recently, one long-forgotten game came to mind.  Skill-Drive.  With electronic (more like magnetic) remote control!  Underneath the road course from Miami to Los Angeles, lay a gizmo with a magnet on the end.  Moving the steering wheel caused that gizmo to expand and contract, allowing the driver to navigate the winding path.

However, the driver needed to take it careful and slow to avoid hitting a bridge or driving off the road.  All in all, a fun pre-PlayStation way to test your driving skill and develop coordination!

Writing in Win the Day, Mark Batterson cites former United Kingdom Prime Minister Margaret Thatcher.  Mrs. Thatcher described a day when you feel supremely satisfied at the end.  Lounging around all day fails to elicit that feeling.  Instead, it’s a day where you’ve done everything you needed to do.

Certainly, tasks that require desirable difficulty slow down the learning process at first.  Above all, though, such tasks yield greater long-term benefits than easy tasks.  Because easy tasks quickly bore us.  Also, if a task is too hard, we quit.

Hence, as we minister to others, we comfort the afflicted and afflict the comfortable.  While we find the former far easier than the latter, the former’s not nearly as important.  While comforting the afflicted results in warm fuzzies, spiritual growth happens through afflicting the comfortable.  James 1:2-4 described this desirable difficulty.  Furthermore, Mark exhorts:

“When we go through tough times, God is building emotional fortitude in us.  He is preparing us for bigger and better things.  The challenges that seem incredibly difficult right now will seem like a cake walk in ten years!”

Finally, in Exodus 29 we discover the Israelites preparing to enter the Promised Land.  However, Mark observes, God throws in a little monkey wrench into their plans.  He tells the Israelites that He won’t drive out the inhabitants in a single year.  Rather, He’ll do it little by little.  In the same manner, God delivers us, promotes us, and grows us little by little.  Why?  At best, we possess an unreliable ability to anticipate consequences.  In addition, God’s reason far surpasses human reason.  Although we often find that hard to accept, Mark cautions that we resist at our own risk.

When Tarco Toys designed Skill-Drive, they created a challenging route.  For a straight road presents no desirable difficulty.  Therefore, stretch goal enable us to go from strength to strength – little by little.  And over time, as you stretch your faith, your ceiling becomes you floor.  But you must pace yourself.  Because if you start too fast, you’ll finish slow.  Thus, Mark encourages:

“Flying the kite . . . [is]  giving it everything you’ve got.  And it’s doing so until the day you die!  Why?  There is no finish line!  If you win the day that way, you will have won the game of life long before God says, ‘Well done, good and faithful servant!’  That’s how you become the best version of yourself possible, and that’s the definition of success.”