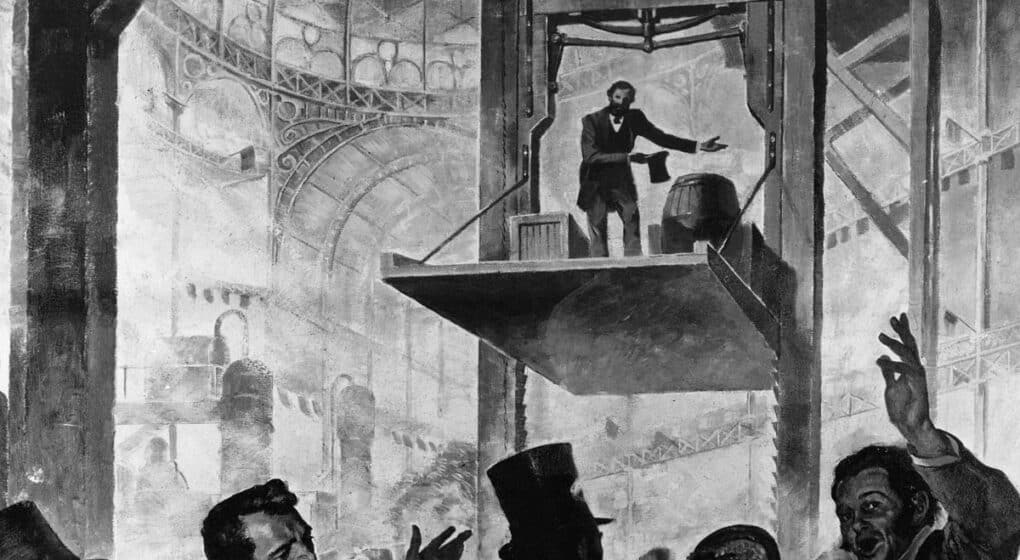 “If you want to imagine unborn tomorrows, you’ve got to cut the rope. . . .  anything less is maintaining the status quo.  You will experience a few falls, a few fails.  But cutting the rope is the way we cut the ribbon on the dreams God has given us.”- Mark Batterson

Before moving on to Chapter 9 (“The Adjacent Possible”) of Win the Day, Mark Batterson introduces Habit 5 – Cut the Rope.  First, Mark tells about what Elisha Otis pulled off at the 1853 World’s Fair in New York City.  Although Otis invented the safety elevator break, he found it hard to sell his idea to safety-first skeptics.

As a result, Otis realized it was time to go big or go home.  So, he stood on an elevator platform hoisted high enough for everyone in the exhibition hall to see him.  Then, Otis cued an ax man positioned above the elevator to cut the rope.  The elevator fell – a few feet.  The crown gasped.

Certainly, it doesn’t seem safe to cut the rope.  However, Mark advises, there’s something much riskier.  Playing it safe!  Hence, the greatest risk involves taking no calculated risks.

In Chapter 9, Pastor Batterson begins with a story about the Chrysler Building (my favorite!).  Standing 1,046 feet tall, it was the world’s tallest building until the Empire State Building unseated it.   Yet, Walter Chrysler admitted to his architect that he wanted to build a monument to himself.  But, the day after the Chrysler Building was crowned the world’s tallest building, the stock market crashed.  And the Great Depression began.

“As we get ready to imagine unborn tomorrows, I begin with a cautionary tale.  Why?  We over estimate our ability to predict the future, and we do it often. . . .  Go ahead and make plans.  Failing to plan is planning to fail, but planning without praying is called presumption.  Imagining unborn tomorrows begins and ends with prayer.  I might add, brave prayer.”

Today’s question: What Bible verses give you the courage to cut the rope?  Please share.