Cry out and shout all round about 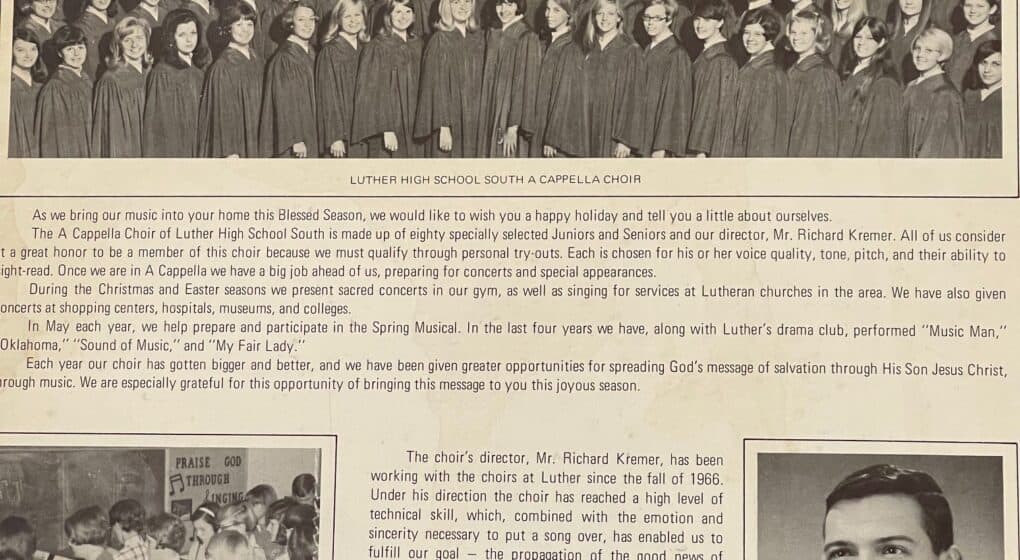 The 1968-69 Luther High School South A Cappella Choir, under the direction of Mr. Richard M. Kremer.

“Sing high, sing low, sing to and fro,/ Go tell it out with speed,/ Cry out and shout all round about,/ That Christ is Lord indeed.”- Listen Lordlings Unto Me, 16th century Gascony carol

“Suddenly a great company of the heavenly host appeared with the angel, praising God and saying, ‘Glory to God in the highest heaven, and on earth peace to those on whom his favor rests.’ “- Luke 2:13-14 (NIV)

The opportunity to record a Christmas album created a memorable experience for the 1968-69 Luther High School South A Cappella Choir.  Recorded over two evenings in the fall of 1968, Music of Christmas featured both a cappella songs and instrumental accompaniments.  I played the pipe organ on three songs and sang bass on the other nine.  In addition, various songs included the talents of Janice Ellendt, Christine Meinert, and Ruth Pralle – flute, John Lindblom – percussion, and Paul Pribula- string bass.

Certainly, the ‘studio’ sessions included some frustrating moments.  For example, if the choir or musicians made an obvious mistake, Mr. Kremer stopped the song on a dime.  After a brief reprise of the troublesome part, it was back to square one.  Try, try again.  And finally, the finished product!  Birthed by our united desire to worship Christ, gifting Him with music and song.

Mr. Kremer chose Listen Lordlings Unto Me as the lead-off track on Music of Christmas.  The French carol features an up-tempo beat that vibrantly echoes Luke’s gospel proclamation of Christ’s birth and the angels’ appearance to the shepherds.  Writing in Because of Bethlehem, Max Lucado notes that the angels’ gift of worship might seem a bit curious.  After all, Pastor Lucado points out, the magi gave Jesus gifts of gold, frankincense, and myrrh.  While the shepherds gifted the baby Jesus with their time and belief.  Practical offerings.

Yet, the angels knew Jesus better than anyone else.  Because the angels loved Him dearest and followed Him the longest, they gave Jesus the gift of worship that night.  And they continue to do so.

Therefore, Max stresses, worship occurs anytime you turn your heart toward heaven and declare God’s worthiness.  Most significantly, God looks for those willing to imitate the angels as they open their hearts and mouths to praise the glory of God.  As Jesus said in John 4:23 (ESV), “But the hour is coming, and is now here, when the true worshipers will worship the Father in spirit and truth, for the Father is seeking such people to worship him.”

But what about people who claim they never worship?  Above all, Max underscores, we all direct our worship to someone or something.  In contrast, like spring rain drenching a thirsty field, worship soaks down, seeps in, and stirs life in your soul.  So, Pastor Lucado exhorts, for your own sake, follow the example of the angels.  Make a big deal about the arrival of the King.  Cry out and shout all round about that Christ is Lord indeed!  Enjoin your heart to thank Jesus.  For He came to bring peace on earth and goodwill to all.

In conclusion, Max encourages us:

“Give Jesus the gift the angels gave him, the gift of praise.  Don the robe of grace, soar on wings of faith, and take your place in the heavenly chorus and sing, ‘Glory to God in the highest.’ ”

Even today, fifty-two years later, Listen Lordlings Unto Me remains a favorite track.  The words of the chorus burst forth from my heart and mouth.  This Christmas, may you too “cry out and shout all round about that Christ is Lord indeed.”