Hands up to heaven – make a joyful noise! 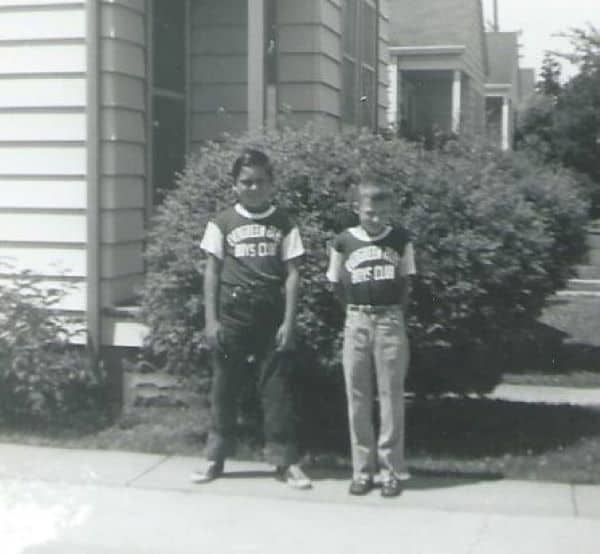 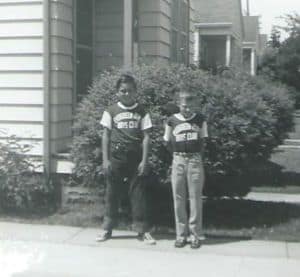 Cliff Podewell (left) and I styling and profiling the latest in Pee Wee League chic.

“Hands up to heaven/ Make a joyful noise/ My heart had to hit the floor/ To find all I’m longin’ for/ But I know you’re so much more/ Than a joyful noise.”- Matt Maher, Joyful Noise

“But be filled with the Spirit, addressing one another in psalms and hymns and spiritual songs, singing and making melody to the Lord with your heart.”- Ephesians 5:18-19 (ESV)

As a kid growing up in Evergreen Park, IL, I loved to play baseball.  Sometimes Cliff and I played on the concrete driveway in front of the Henning garage, using a plastic bat and whiffle ball.  Small bricks served as bases.  If we gathered enough guys for two small teams, we headed for a ball field and backstop a half-block away.  We took along our wood bats, league baseball, and gloves.  Or sometimes we opted to play ‘Strikeout” on the playground of Northeast School.  We’d draw a strike zone on an outside brick wall with chalk and use a rubber ball for safety.

I also played organized baseball for two years.  The first year Cliff and I played Pee Wee League baseball as members of the Phillies.  Because no outfield fences existed, any ball getting past an outfielder might result in a home run.  However, my ‘good field, no hit’ self never achieved that lofty goal.  Although, in a rare display of power, I once hit a triple!!  After my second year of play, at the ‘major league’ level, I knew playing right field for the Chicago White Sox wasn’t in the cards.

Certainly, I found it difficult to accept my weakness as a hitter.  Yet, the Lord enabled me to leverage that weakness.  As a result, I developed a keen eye for balls and strikes, often coaxing a walk from the opposing pitcher.  And I mastered the art of the stolen base.  In fact, I once stole home!  In his most recent book, Hope in Times of Fear, Timothy Keller addresses a joy that comes through sorrow.  Hence, in Psalm 126:5-6 we read, “Those who sow with tears will reap with songs of joy.  Those who go out weeping, carrying seed to sow, will return with songs of joy, carrying sheaves with them”

Therefore, God calls us to sow our tears, not waste them.  Thus, a sorrow exists that produces joy – hands up to heaven.  And the Holy Spirit brings the divine comfort of the declarations and promises of God’s Word home to the heart.  In the process, the Holy Spirit makes God’s presence, love, and power real to us.  Furthermore, when we wonder and adore Christ’s beauty and glory amid suffering, it grows a joy within not based on changing circumstances.  Also, as Paul writes in 2 Corinthians 3:18 (ESV), looking to Christ’s greatness and glory changes us into His “image from one degree of glory to another.”

In conclusion, Pastor Keller ties the sorrow that produces joy to the raising of Jesus from the dead.  With hands up to heaven, make a joyful noise:

“The principle of joy produced by sorrow and strength out of weakness is operative because Jesus was raised from the dead.  Paul says because the resurrection of Jesus happened, it’s the very meaning of history that redemption comes out of injustice; that life comes out of death.

. . . .  In the central event of the history of the world, Jesus’s suffering did not just give way to joy; it produced it.  His agony and weeping were substitutionary.  He took our punishment.  Thus, his weeping was the ultimate sowing in tears and produced the ultimate reaping in joy.”