Flying a jet without a parachute 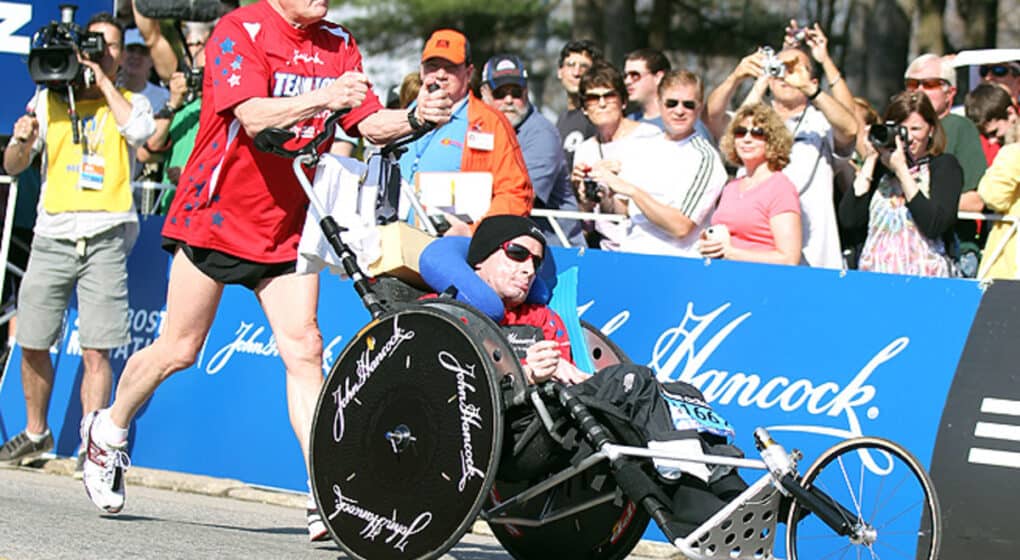 “Can you imagine flying a jet without a parachute?  Many do.  Eternal insecurity extracts joy from many people.  Only Christ guarantees a safe landing. . . .  No one but Jesus ‘buckles you in.’  You may slip — indeed you will — but you will not fail.  Hence the invitation to believe in him.”- Max Lucado

“To the one who does not work but trust God who justifies the ungodly, their faith is credited as righteousness.”- Romans 4:5 (NIV)

However, only half of Team Hoyt ran.  Because at Rick’s birth, the umbilical cord wrapped around his neck.  As a result, that starved oxygen from his brain.  Although doctors offered little hope for his development, his parents knew he could think.  Eventually, Rick graduated from college.

So, Dick pushed, pedaled, and towed Rick.  Thus, Rick depended entirely on his dad’s strength.  God, Max underscores, wants you to do the same.

Yet, Pastor Lucado cautions, the phrase ‘believes in him’ fails to digest well in our culture’s desire for self-sufficient spiritual food.  Instead, people today seek to try harder, work longer, and dig deeper.  For we’d rather rely on ourselves.  But in Romans 4:5 Paul assures salvation to the child who trusts with Rick Hoyt reliance.

“Jesus blazed a stand-alone trail void of self-salvation.  He cleared a one-of-a-kind passageway uncluttered by human effort.  Christ came, not for the strong, but for the weak; not for the righteous, but for the sinner.  We enter his way upon confession of our need, not completion of our deeds.  He offers a unique-to-him invitation in which he works and we trust, he dies and we live, he invites and we believe.”

Tomorrow’s blog: “A glimpse into the pit – hell”