A challenge as well as a promise 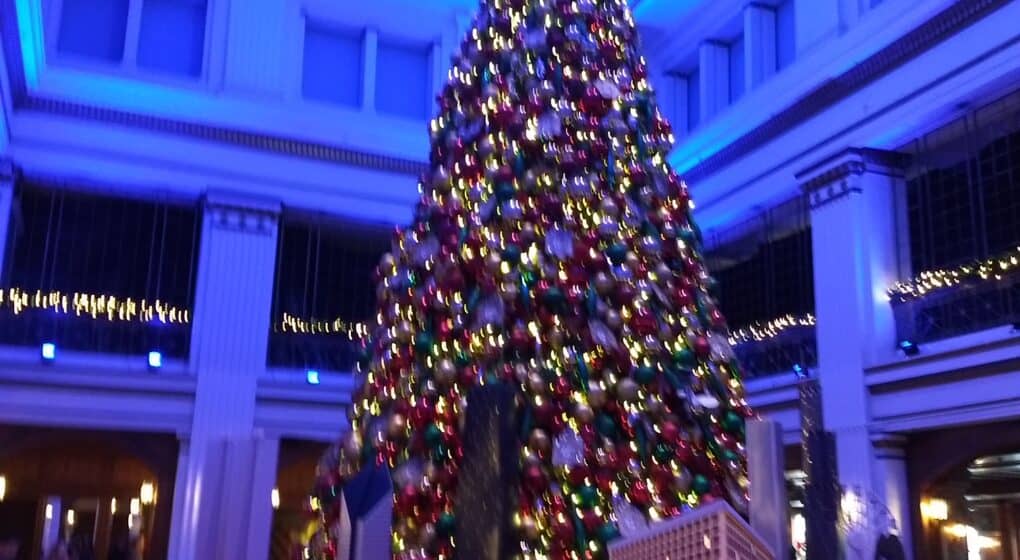 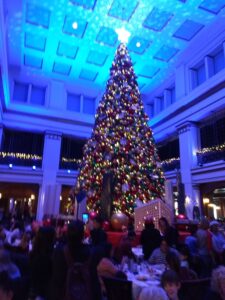 The Great Tree in the Walnut Room at Macy’s in Chicago, December 2018.

“The incarnation, Christmas, means that God is not content to be a concept or just someone you know from a distance.  Do what it takes to get close to him.  Christmas is a challenge as well as a promise about fellowship with God.”- Timothy Keller, Hidden Christmas

It all began with chicken pot pie.  Back in 1890, a saleswoman named Mrs. Hering worked in the millenary department at Marshall Field’s in Chicago.  In her job, she heard frequent complaints from her customers about the lack of decent places to eat on State Street.  so, Mrs. Hering set a table and shared her homemade, family-recipe with her grateful customers.

Consequently, Marshall Field’s opened its first tea room that year, with five tables and a silver tea service.  Then, in 1893, Field’s expanded the tea room, just in time for the Columbian Exposition.  The restaurant served 1500 people a day.

Finally, the Walnut Room opened in September of 1907.  The first Great Tree appeared that Christmas.  An artificial tree since the early 1960s, today’s Great Tree is adorned with over 2000 ornaments and 6000 lights.  Eating lunch beneath the Great Tree remains a Chicago holiday tradition.  Mrs. Hering’s chicken pot pie still tops the menu.  And perhaps a passing fairy princess will drop some fairy dust on you.

Yet, although the glistening Great Tree fills the Walnut Room with an aura of wonderment and reverence, Macy’s studiously avoids any reference to the Chrisitan origins of Christmas.   Writing in Chapter 8 (“The Doctrine of Christmas”) of Hidden Christmas (2016), Timothy Keller underscores that we must do what it takes to get close to God.  Because Christmas presents a challenge as well as a promise about fellowship with God.  Therefore, the beginning of the First Epistle of John omits the familiar biblical accounts of Jesus’ birth, angels, Mary and Joseph, shepherds, and wise men.  Instead, John provides a concise explanation of what the nativity means.

Most significantly, as Christians saved by grace, it’s crucial that Jesus’ incarnation, atonement on the cross, and resurrection from the dead actually occurred in time and space.  Thus, when John writes of hearing, seeing, and touching, he’s not making conversation.  Rather, according to New Testament scholar Robert Yarbrough, the verbs correspond to varieties of witness attestation in the ancient court system.  Hence, John virtually swears a deposition.  And the goal of John’s proclamation in verses 1 and 2 is fellowship with God.  Christ’s incarnation makes the difference.  As Charles Wesley wrote in ‘Hark! The Herald Angels Sing’, veiled in flesh the Godhead see.  Through the person of Christ we see the glory of God.

In conclusion, Pastor Keller compares the joy Christmas brings to a subterranean river, a fountain of mirth.  One that always invigorates you, no matter the circumstances of life.  At Christmas God packed unimaginable greatness into a manger.  However, the world fails to comprehend that message, preferring spectacle instead.  As a result, Timothy exhorts, don’t allow the ordinary nature of the means of joy put you off.  For you find a challenge as well as a promise in the extraordinary riches of the Gospel.

In verse three of O Little Town of Bethlehem (Phillips Brooks) we contemplate:

How silently, how silently / The wondrous gift is given! / So God imparts to human hearts / The blessings of His heaven. / No ear may hear His coming, /But in this world of sin, / Where meek souls will receive Him still, / The dear Christ enters in.”