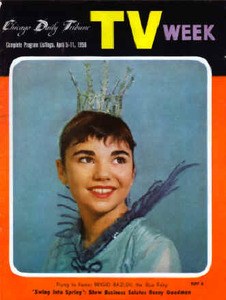 “We all hope, but hope comes in two flavors- hoping  for something and hoping in someone.”- John Ortberg, Know Doubt

In a moment, in the twinkling of an eye, at the last trump:  for the trumpet shall sound, and the dead shall be raised incorruptible, and we shall be changed.”- 1 Corinthians 15:52 (KJV)

It’s almost 7:30 pm on a chilly Monday evening in 1958.  While parents watch in an adjoining room, a studio technician escorts me and five other youngsters to our seats- oversized mushrooms in The Blue Forest.  At 7:30, The Blue Fairy, suspended by wires, flies above the forest, saying: “I’m the Blue Fairy.  I’ll grant you a wish to make all your dreams come true.”  Resplendent in her blue gown and diamond tiara, Brigid Bazlen clasps a silver wand.  After descending to the forest floor, she asks each of us a question: “What is your favorite zoo animal?”

In 1958, WGN-TV, then located in the Prudential Building, produced two color programs- The Blue Fairy and Garfield Goose & Friend.  Although only televised in the Chicago area, The Blue Fairy won the Peabody Award for best children’s programming that year.  The award catapulted the series- and Brigid- to national attention.  Brigid later appeared in King of Kings (1961) as Salome and in the soap opera Days of Our Lives (1972).

Scottish author, poet, and Christian minister George MacDonald (1824-1905) once wrote: “Anything large enough for a wish to light upon, is large enough to hang a prayer upon.”  Yet, as John Ortberg points out, we must recognize the truth that one day every thing we hope for eventually disappoints us.  That’s why hope comes in two flavors.  Therefore, through the power of the Holy Spirit, faith requires:

Furthermore, Pastor Ortberg suggests, our wishes reveal something true about why we exist and the reason God created us.  And Frederick Buechner echoed these thoughts when he stated that “sometimes wishing is the wings the truth comes true on.  Sometimes the truth is what sets us wishing for it.”

Three-day stories-  Jesus’ death and resurrection, for example- demonstrate (1) desperate need and anticipation and (2) hope hanging by a thread.  Although that hope comes in two flavors, only one flavor transforms your soul, rather than reducing Jesus to a heavenly meal ticket.  John Ortberg explains:

“What got released on Sunday was hope.  Not hope that life would turn out well.  Not even hope that there will be life after death.  Hope that called people to die: die to selfishness and sin and fear and greed, die to the lesser life of a lesser self so that a greater self might be born.  And many people did.  This hope changed things.”