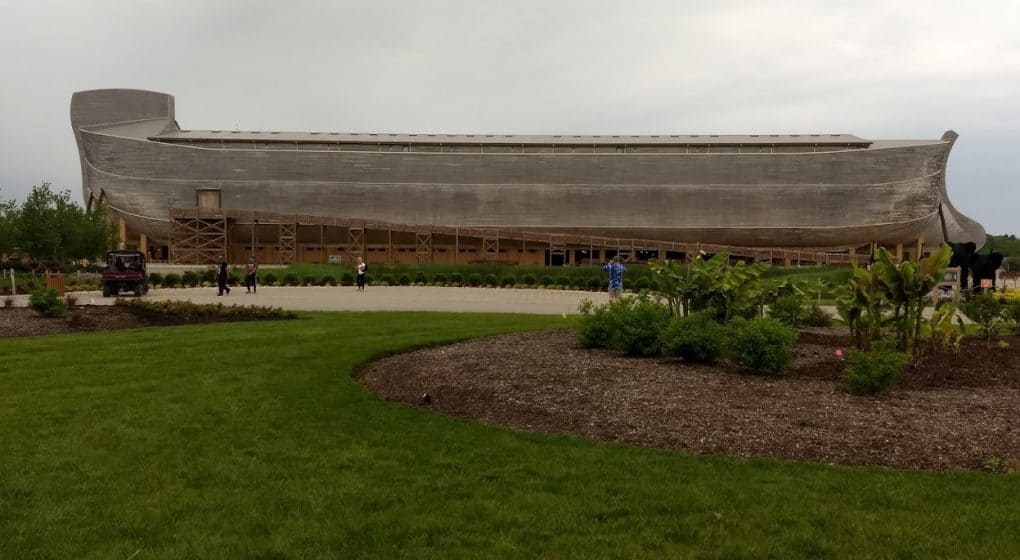 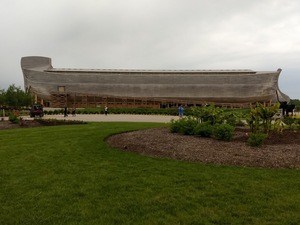 The Ark Encounter in Williamstown, KY — largest free-standing timber structure in the world (3.1 million board feet of lumber).

“Noah walked with God, but he didn’t preach righteousness, he acted it.  He went through water and didn’t melt.  He breasted the current of popular opinion of his day, scorning alike the hatred and ridicule of scoffers who mocked at the thought of there being but one way of salvation.”- Charles Studd (1860-1931), cricket player and British missionary

“By faith Noah, when warned about things not yet seen, in holy fear built an ark to save his family.  By his faith he condemned the world and became heir of the righteousness that is in keeping with faith.”- Hebrews 11:7 (NIV)

Vicki and I pulled into the Ark Encounter’s humungous parking lot.  It took us a minute to spot the Ark.  But there it stood, resting majestically on a rise about a mile away.  After purchasing our tickets, we boarded a bus that traveled down a winding road to the Ark.

Using a royal cubit to determine the Ark’s dimensions, the massive structure measures 510 feet in length, 85 feet in width, and 51 feet in height.  Although the Ark Encounter estimates that Noah took nearly 7,000 animals on the Ark, foodstuffs, water, and other items filled much of the vessel.  In fact, the Ark contains the same storage capacity as 450 standard semi trailers.  Most noteworthy, Journey Through the Ark Encounter describes the purpose of this exhibit:

“In contrast to the popular, overly cute Ark and Flood images, the Ark Encounter sets the somber, realistic tone of a family about to endure the greatest trial of their lives.”

According to the Ark Encounter, in the reasonable maximum range of 55 to 75 years it took him to build the Ark, Noah walked with God, despite the scoffing of his critics.  Yet, Noah gave his critics no words.  Because that’s exactly what his critics wanted – a voice.  Writing in The Next Right Thing, Emily P. Freeman observes that not all critics are created equal.  And when we allow all critical voices to weigh the same amount, Emily cautions, trouble comes.

Of course, it’s important to seriously consider critiques offered by people who believe in you.  As a result, consider their words with humility and grace.  Open yourself in Christ’s presence, allowing His words to partner with their critique to reveal the truth.

However, the negative critic only lives if you let that person live.  Even the one living in your own  head.  Furthermore, it’s impossible to change the mind of any negative critic.  Instead, Emily exhorts, change yours.  Refuse to give your critic words.  Take his/her seat away from the table and relocate it in the hall.  Besides, Emily notes, your critic unintentionally brings you a gift:

“Here is the thing it . . . always comes down to in the kingdom of God, where our belief slams right into everyday life.  The critic points out my weakness and my fear, but if I’m paying attention he will also point out something else, a gift I would never dare to ask for and a motivation he never means to give.  The gift  the critic brings, whether we like it or not, is a line in the sand.”

So as you face your biggest fears and make your choice, listen hard to the voice of God!